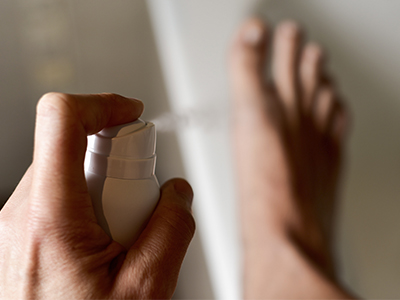 The topic of foot odor is obviously a personal and sensitive subject. Rarely is it the primary discussion at an evening party and when brought up between close friends, only occasionally does it receive more than a bashful grin. But in all seriousness, offensive foot odors can be a real problem. For many so afflicted, it is common to ignore the condition or accept is as one would hair loss or freckles. However, it should be emphasized that this condition is very treatable. Professional care is available to treat the cause and effects of foot odor. In the majority of cases, a successful resolution of the problem is readily attainable.

Foot odor in general, is usually a manifestation of excessive perspiration. For many, the hands and feet are frequent sites of pooling with resultant wet areas and occasional skin discoloration. Thus, our first line of attack in treating this problem is to effectively reduce or minimize excessive perspiration. An attempt is made to limit the use of nylon stockings and socks which traditionally promote perspiration. Shoes should be changed rather frequently and the use of breathable leathers as opposed to the more occlusive synthetic shoe materials is encouraged. Topical applications, soaks, and occasional oral medications are given for the purpose of reducing the output of perspiration.

Perhaps the most important factor involved in this condition is the chemical make-up of perspiration itself, for it is this factor indeed, which causes odor. The old saying, "You are what you eat," certainly applies in this case. Dietary intake modifications are essential in order to affect the end result. Obviously, garlic, onions and other higher spiced foods must be greatly reduced until the condition is well under control. It is important to keep in mind that an offensive foot odor is a treatable condition, and once the causative factor is identified, one that can usually be remedied.

Want Some Help Getting Back On Your Feet?